Fed's press release on enforcement issues included two items, both involving Adams. The first was against Adam Koontz for playing loosey goosey with the lending policies of Fayette County Bank in Illinois, which contributed to the bank's eventual failure. The second was against Adams Bank and Trust in Nebraska, which got hit for flood insurance issues. [5/17/19]

Risk Watch 153: What You Need to Know About Elder Financial Exploitation 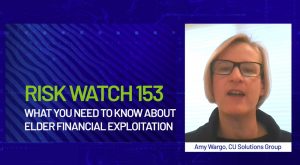 Losses to senior citizens from financial abuse are estimated to be $3 billion last year alone. Banks and credit unions are on the front lines when it comes to detecting and reporting suspected instances of abuse. At the same time, they have an obligation to protect the privacy of their customers and respect their wishes to conduct lawful transactions. Amy Wargo of CU Solutions Group presents how financial institutions can navigate this delicate balance through effective employee training. Click here to watch now.